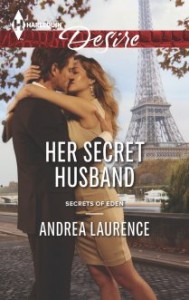 I feel like all I’m doing is announcing new books anymore, but I have so many coming out! This one is especially anticipated because it’s the final book in the Secrets of Eden series.

A lot of you have written me over the last year or so with questions about Julianne. Why are there only four books? Why doesn’t Julianne get her own story? There was much righteous indignation on her behalf. I tried to respond vaguely…insisting she would have her story and leaving it at that. That’s because I didn’t want to spoil the ending. I’ve been building up to this secret over the last four years – not just the secret about the dead body, but the secret marriage of Heath and Jules!

At the end of HEIR TO SCANDAL, the police come to take Ken in for questioning in the suspicious death of Tommy Wilder and he collapses with a heart attack. Again, much reader mail! Sorry! HER SECRET HUSBAND picks up immediately where it leaves off as the family circles the wagons to keep the family business running during the critical holiday season and deal with their big secret bubbling to the surface.

HER SECRET HUSBAND is available at all the usual venues. Pick up your copy now and finally get all the answers you’ve been waiting for!